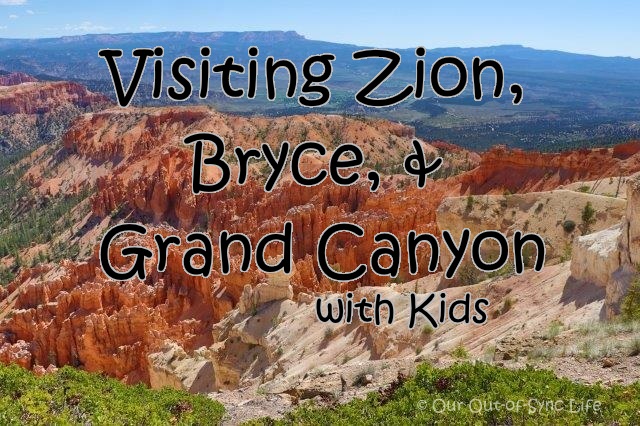 As I shared in the previous post in this series, Zion was our absolute favorite of the three National Parks that we visited.  But Bryce Canyon is special in its own right.  A beauty unlike anything ever seen before and worth every mile it took us to get there.  Read from the beginning of this series.

We left Zion National Park early to enjoy the scenic drive.  What should take approximately 2 hours is multiplied by the numerous picturesque stops along the way.  (So slow down and make sure the kids keep their shoes on!) 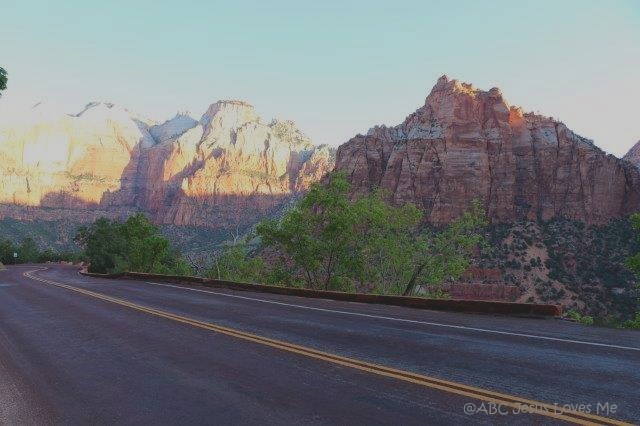 The ten-mile stretch from the Zion entrance to Mt. Carmel is a fun trek.  With its switchbacks, gorgeous views, and 1.1 mile tunnel, I was thankful it was the road we had to take to get to Bryce Canyon because it is not one to miss.

Immediately after the tunnel (on the east end) is the popular Canyon Overlook Trail.  When I say immediately after, this is a literal statement because we missed the parking lot on the right.  It is very small and fills up fast.  Doing a u-turn, we found a parking spot and began this hike.  But after a short distance, the narrow trail, damp rocks, and steep drop-offs encouraged us to turn around.  No view was worth someone falling.  In other words, I don’t suggest this trail with children. 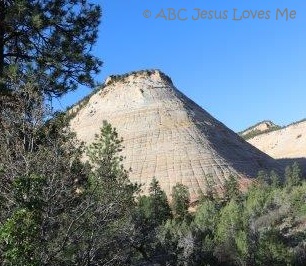 Traveling a while longer we came upon the unusual Checkerboard Mesa on the South side of the road.  Because we were early, the pulloff was almost empty and we were able to take pictures of the unusual lines in the rocks caused by water freezing and thawing making the rock hill look like a checkerboard. 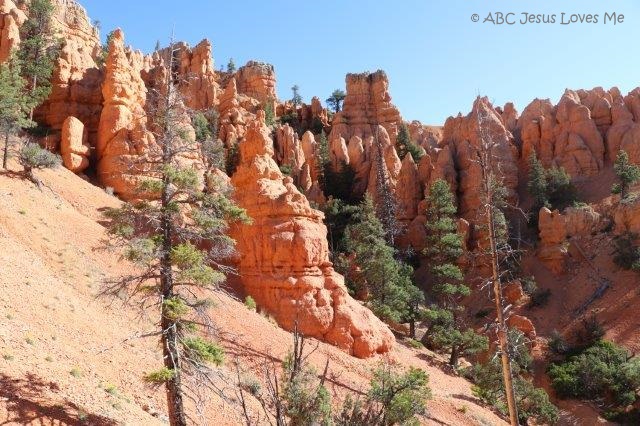 Definitely take a moment to stop and climb around Red Canyon in the Dixie National Forest.  The deep crimson colors of the rocks are gorgeous.  Close to Red Canyon begins a wonderfully paved bike and hiking trail that runs all of the way into Bryce Canyon.  If you like to camp, there are a few campgrounds along the paved trail.

To my surprise, there are very few lodging and restaurant options in the town of Bryce.  We stayed at the famous Ruby’s Inn.  There are lots of rooms and the pool is very nice at this older, remodeled hotel.  Also available is the Lodge at Bryce Canyon which is the only lodging option inside the National Park.

The sit-down Ruby’s Inn and fast-food diner were two options for eating outside the park with a couple more options in the park.  Thankfully we had prepared for little options and high prices and had previously purchased breakfast and sandwich food to eat in the hotel and while hiking.

Park passes are available to purchase at Ruby’s Inn.  Once again Sweet Pea’s 4th Grade National Parks pass got us in for free which saved us $30.  Ruby’s Inn also includes a Post Office and grocery store. 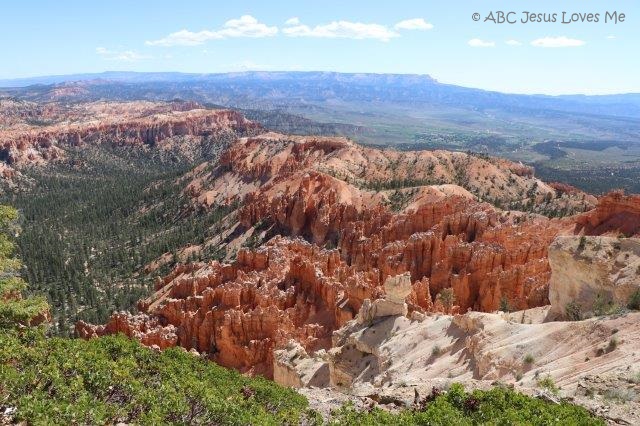 On our first day to visit, we rode the shuttle to the final stop, Bryce Point.  The drive is pretty flat and surrounded by trees.  We all began questioning where the shuttle was taking us.  Finally the shuttle turned left into the final stop and we were greeted with the most majestic view!  I couldn’t help but wonder how settlers felt when they stumbled upon the landscape.

After observing the views, we headed on the Rim Trail back to each of the viewing points.  This trail is very simple and for the most part is very wide. 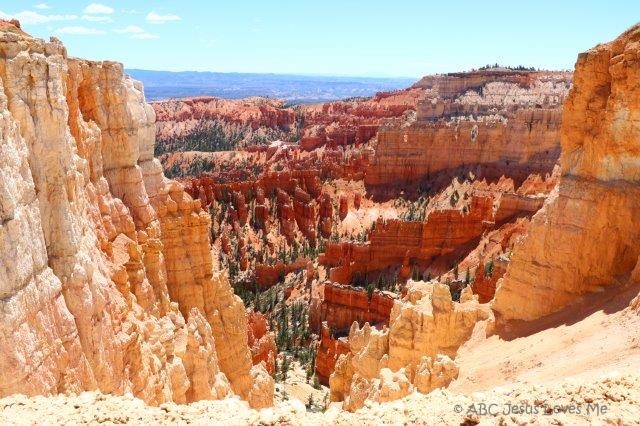 To say the views are stunning would be an understatement.  What I found amazing is how at each turn the canyon view changes.   Almost like looking at a different canyon.  The tall skinny spires of rock protruding from the bottom of the canon are called hoodoos.   Nowhere in the world are they as abundant as in the Bryce Canyon National Park.

On the second day we drove into the park to the last stop (Rainbow Point) and then worked our way back, stopping at each lookout point and enjoying some short trails.  Even on the day after Memorial Day, the traffic was very light and on most stops we were alone.

Bryce Canyon was definitely the easiest of the National Parks to do with kids.  While there were dramatic drop offs, the trails that we took were wider.  The color temperatures also helped.

The one regret that we have is not taking some of the trails into the canyon and walking among the hoodoos.  We were told the trails were pretty tough and had reservations.  But we wish we would have at least gone a ways just for the experience.

After driving through Bryce, we pointed the van southeast.  In Hatch, UT we stopped at the Galaxy Diner and had what the kids considered, “The best meal ever.”  The waiter was just a jewel and his manners were inspiring.  Great teachable moment.

Back in the van, once again we saw the terrain evolve and the time changed since most of Arizona doesn’t observe Daylight Savings Time.

Page, Arizona is where we landed.  The man-made Lake Powell reservoir is amazing and I wish we could have enjoyed a boat trip through but the cost was more than we could do.  What makes this unique are the huge rock formations that randomly appear throughout the lake.  We enjoyed looking at the Glen Canyon Dam and the free Visitor’s Center.

The Canyon Tours are popular as well but we were advised not to do them because the colors that you see in photos aren’t visible with the naked eye.  We enjoyed the El Tapoatio Mexican Restaurant but it was the Chill N Grill that we talked about for several days.  The best burger I have ever eaten.  Yum! 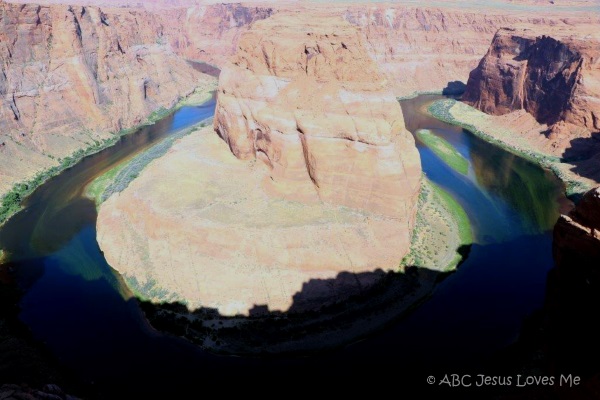 You can’t visit Page, Utah without driving 5 minutes and taking the 3/4 mile hike to see Horseshoe Bend.  After a boring, hot, sandy hike, you stand above a picturesque horseshoe-shaped meander of the Colorado River.  (There is no shade during this hike.)

In my research for this trip, I found stunning images of this sight.  There was a little let-down when I saw the real image because the vast array of colors aren’t visible most of time.  But it was still a gorgeous view and well worth the hike.

The worst part of visiting these sites are the people who try to defy gravity and get within inches of instant death.  It is not an option to take a child to see this view without their obedience.  We stayed away from the edge by several yards and I still have death grips on the youngest two’s hands.  To preserve the view, no guards of any kind are present.  It was a reminder to me of the important of requiring first-time obedience!

So, take the trail and enjoy the view, but be sure you hold those little hands.

There you have it.  The third post in this series leading up to the Grand Canyon finale!

So, for those who have also visited these amazing places, what would you suggest? 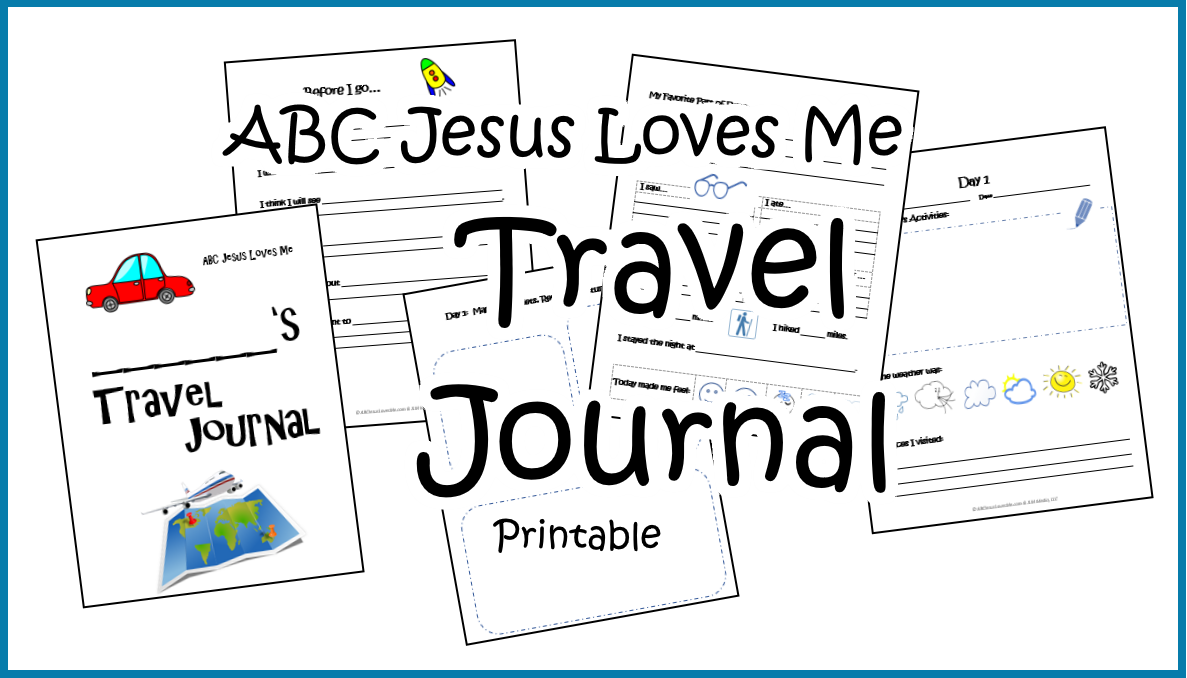 The ABC Jesus Loves Me Travel Journal is a free printable for all subscribers to this blog!
Find the link at the bottom of your blog email or RSS feed or you can order it here for $10.
Subscribe here – http://forms.feedblitz.com/5p2

Previous Post: « Gearing Up for School without the Stress
Next Post: Fun Ways to Teach Your Children the Armor of God »